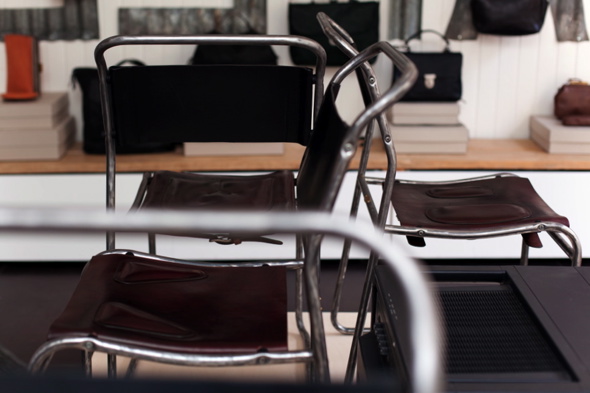 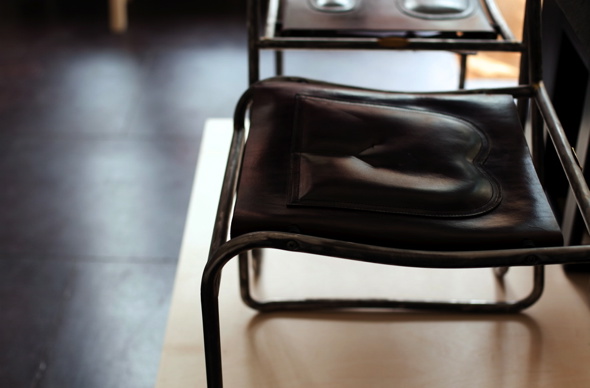 Initially conceived by the Bauhaus group, they were the inspiration for many manufacturers in the interwar period in Britain. The PEL (Practical Equipment Limited) name quickly became synonymous with the product, and exploited the interest in modern shapes and design durability. These chairs have been the mainstay of schools, church halls and factories ever since.

Originally manufactured by Cox of Watford, this set has been stripped back to their raw steel frames and taken in a new and inventive direction. Using the premise Bums on Seats as a starting point, Ally looked at the way that we position ourselves whilst seated – Left Leaning, Knees Up for example – and then designed eight variations on the theme.

Our London factory have made up the seats, which have been stitched and hand polished, using the same Italian bridle leather as Ally Capellino belts and bag straps.

Long time AC collaborator, Donald Christie has elaborated on the concept producing a hypnotic black and white film. The treatment references the 1957 Oscar winning short A Chairy Tale by Norman McLaren and Claude Jutra, and is a playful take on Brechtian theatre.

During the London Design Festival there will be a Bums on Seats installation at each of our London shops and at the Victoria and Albert Museum. The installations have been designed by another regular collaborator and PEL chair enthusiast, Rupert Blanchard.

Donald Christie, Rupert Blanchard and Ally, will be discussing the project during the London Design Festival at the V&A’s Hochhauser Auditorium, Sackler Centre, at 2pm on the 19th September. We recommend you reserve your seat here or you can just come along on the day.

As part of the Shoreditch Design Triangle we’re having a late night opening and drinks event at our Calvert Avenue shop on Tuesday 17th September, 6-9pm. All are welcome.

Rupert Blanchard will be hosting an evening with drinks at our Portobello Road shop on Wednesday 18th September, talking about the evolution of the tubular stacking chair and showing us examples from his collection.

Carving its own niche between design and fashion, Ally Capellino is the creative vision of British designer Alison Lloyd. Best known for bags and accessories… 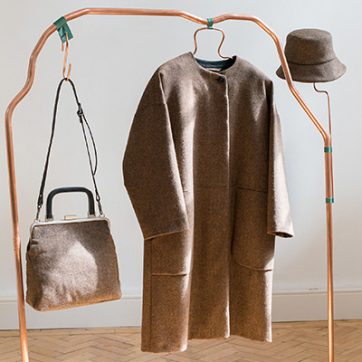 A chance meeting on Instagram, has prompted ‘Ding Dong’, a collaboration for this years…

Starting at Bums on Seats at Ally Capellino, 9 Calvert Avenue,…