At tokyobike a variety of tea, grown by a 350 years old Wazuka farm, will be served to visitors. The evening will also offer an opportunity to informally meet a small Japanese team exhibiting and demonstrating the use of contemporary su-zu-ri (ink-stones).

Regional products like tea and suzuri (ink-stones) have been highly prized inside Japan and until recently were not widely available in the West. Now, a new generation of tea farmers and craftsmen have sought to reach a global market for their products with the support of small companies such as tokyobike and the many small and specialist tea merchants that have set themselves up across England in recent years.

Wazuka cha is known as the tea of wisdom.

Tea has been grown in Wazuka since being imported from China during the Kamakura period (1185 -1333). The mountainous nature of the terrain makes for difficulties in harvesting but contributes to a variation in temperature between night and day providing a climate which fosters quality tea growing. Tea is an evergreen plant and the seemingly endless rows of tea bushes across the slopes of Wazuka creates a lush scenery.

The area is particularly known for the production of Uji-cha, one of Japan’s finest teas marketed by merchants in nearby Uji, but actually grown in Wazuka.

Many of the tea farms in Wazuka are family-owned. Wazuka produces a variety of teas including: Sencha, Hoji-cha, Kyoban-cha, Oolong-cha, Genmai-cha and Matcha charteristic of the tea ceremony. All of the teas that you will taste are certified organic (Japan standard).

Ogatsu in Ishinomaki City, Miyagi Prefecture, is a town that dates back to the Muromachi era. It became known for the high quality of its suzuri (ink-stone) making and is said to have once accounted for 90% of the production of Japanese ink-stones.

While the industry prospered until the latter half of the Showa Period (1926-1989) thanks to the widespread use of ink-stones in Japanese schools, it subsequently began to decline and was later completely washed away in the Tsunami that struck the area during the Great East Japan Earthquake.

In calligraphy, ink is traditionally formed by grinding ink-sticks on a suzuri; in this process the heart is calmed, following on from which, writing can commence. This approach reveals the true spirit of calligraphy and it why it has long been revered as an art.

In modern Japan the practice of making ink has all but disappeared and nowadays in schools it is common to simply use liquid ink. With the spread of digital devices, only a simplified culture of letters remains as the writing of words by hand is declining. Thus the majority of people have never experienced grinding their own ink and an entire culture of writing with brush is as much at risk as the craft of suzuri making itself.

Today, only one craftsman is left in the area, not only is the future bleak for suzuri production, but also for the training of those who would like to succeed him.

Seven young designers working alongside Mr. Ichio Endo, the last of the Ogatsu suzuri carvers, have created new ink-stone designs, which are presented in this exhibition. 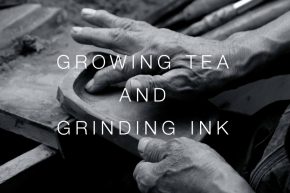