For thousands of years light has been used by architects, craftsmen, artists and makers in their designs to enhance the space in buildings and to decorate them. Catching the Light presents three current artist/makers using and creating light in their work in completely different ways, but all to that same end.

Linda White trained in textile design, but completed an internship in stained glass-making a few years ago and now uses her knowledge of floral design to make stained glass panels to commission and for sale. Linda’s inspiration for her work comes from the natural world, from folklore and also from a range of artists including Frieda Kahlo, Gilbert and George and David Hockney. Her work is all her own though, as she cleverly unites the different elements to create stained glass panels that glow whether used hanging in a window or lit artificially from behind.

Richard Mason studied sculpture within his fine art degree, but when he was able to return to art and making a few years ago it was kinetic sculpture that caught his interest, particularly the work of Alexander Calder. The group of Richard’s work showing in Catching the Light have a common theme in the strong vertical and horizontal lines, with geometric shapes hand made from brass and wood. The brass shapes naturally catch the light with movement and the wooden forms are polished to add a soft sheen that glows and adds richness to the work.

Born in the Netherlands, Peter Gabriëlse lived in an old house that inspired the artist from his earliest years. After finishing his art studies, he became a set-designer making his first ‘boxes’ as part of his work. The box sculptures eventually became his main focus and have been exhibited all over Europe and in New York. To create that patina of age in his boxes, Peter only uses old elements, scouring antique markets for each piece of wood and metal;  he then adds drama to each box by using his experience as a set designer to create a shaft of light from the side, as in a theatre. 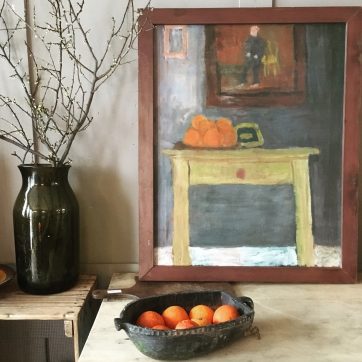