Since the award’s inception in 2013, it has rapidly achieved a nationally renowned reputation as one of London’s most sensational, yet accessible art awards. Widely praised for its scope, quality, and variety, The HIX Award is at the forefront of the emerging art scene in the UK today.

Many young artists and graduates struggle with the transition between university and the professional art industry. The award, now in its sixth year, offers the opportunity to be involved in a group exhibition in an established gallery, as well as the chance to receive one of London’s most-generous award prizes for students and recent graduates.

Responsible for discovering some of the stars of tomorrow, the award attracts artists from across the country and a range of disciplines. Application is open to current students and graduates of the last two years, working in all art forms. This is also a chance to build a long-standing relationship with the gallery, as well as the opportunity to be part of a mentorship programme along with previous HIX Award winners.

All artists selected for the shortlist will be involved in a professionally run and curated exhibition within the gallery.

The gallery will cover and produce the branding and advertising of the exhibition as well as: press release, invitations, a fully secured and invigilated exhibition, and professional photography of their pieces on display. The gallery team will help to develop artists’ language by guiding and advising their individual biographies and artist statements.

The prize-giving ceremony for The HIX Award is one of the most popular events in the HIX Art calendar, attended by a huge network of influential people in the arts industry. The ceremony also acts as the private view and it is at this event that the winners will be announced.

The gallery always aims to present a coherent and thought-provoking exhibition dedicated to exploring contemporary issues, concepts, and aesthetics. The exhibition will open 15th September and run until 11th November 2018.

After the initial two-month run at HIX ART, the exhibition will be hosted by private bank and HIX Award lead sponsor Coutts for a further two months at their monolithic central London site, expanding the reach of the artists and artworks involved.

The winner of The HIX Award 2018 will receive a £10,000 cash prize to go towards studio costs and a solo exhibition at HIX ART in 2019. The winner will also receive a year’s guardianship and name etching on the iconic HIX Award trophy, designed by Damien Hirst.

The HIX Award runner-up will receive £1,000 worth of Cass Art vouchers and this year’s People’s Choice winner will be treated to a weekend trip for two to HIX Townhouse in Lyme Regis with a scenic dinner at HIX Oyster and Fish House.

After the initial selection of shortlisted artists has been finalised by the gallery team (led by Mark Hix), the works will be curated as a group exhibition. The pieces will then go under the scrutiny of a panel of esteemed judges that has previously included; Tracey Emin, Gavin Turk, Stephen Webster, Dylan Jones, amongst others, who will choose the winner and first runner-up of The HIX Award 2018.

The award prides itself on the diversity of its adjudicators. Appointing an extremely varied panel of experts, the exhibition will give artists the chance to expose their work to a large network of influential individuals from the arts and beyond.

Unique to The HIX Award, the People’s Choice Award gives the public the opportunity to support their favourite artists and works in the show. Encouraging a dialogue and interaction with the visitors and viewers, this is a special recognition for one artist particularly well-regarded by the public. 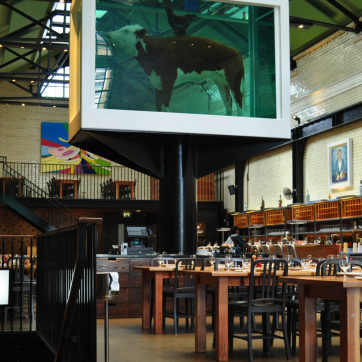 Celebrated chef and restaurateur Mark Hix unveiled HIX ART when he opened the iconic Tramshed restaurant back in 2012. Hix knew he wanted to create…