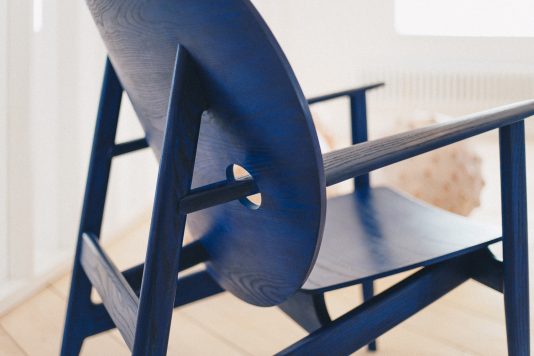 As part of this year’s Shoreditch Design Triangle, Oliver Spencer is proud to present new work by up-and-coming furniture designer Mac Collins at the Oliver Spencer store, 10-12 Calvert Avenue from 14-22 September. Collins will showcase his chair ‘Iklwa’ in the presentation.

Graduating with a degree from Northumbria University last year, Mac Collins is being touted as one of Britain’s most exciting new designers. Motivated by his own mixed European and Caribbean heritage, Collins is recognised for creating handcrafted designs imbued with personal, cultural stories. Previously his work has touched on topics including the African diaspora and the slave trade. Meanwhile Collins’ production practices are influenced by values often found within Scandinavian furniture-making.

A self-taught tailor who began by selling vintage clothes at Portobello Road market today Oliver Spencer is regarded as one of the most important menswear fashion designers in the UK. Launched in 2002, his eponymous brand is renowned around the world for its unique modern take on traditional British style. Oliver Spencer is stocked globally in over 100 stores as well in five stand-alone stores including the Oliver Spencer shop at 10-12 Calvert Avenue, London E2 7JP.

Frustrated by the limitations of art school and impatient to strike out alone, Oliver Spencer abandoned studenthood in favour of a stall at Portobello Market.…