This Oli Goss Art production is Anna’s third exhibition at LDF as Anna Burns Object. For Hayden, known for his sardonic twist on 21st century life – and death – it marks his first foray into the design world.

It’s a seamless crossover as both their day jobs require remarkable similarities. Art and design play an integral part in the creative process, both combining imagination, interpretation and precise execution to deliver their visions.

Inspired by this natural alliance, they’re show-casing a selection of fabrics featuring ABO original designs intertwined with Hayden’s hand-drawn depictions. These are informed by Anna’s mixing of the everyday alongside the provocative and surreal.

Anna’s print “Strip” draws on a photocopy aesthetic that puts a twist on the usually banal striped patterns. While “Heavenly Bodies” takes the breast out of context and places it into a digital Magritte-style textile of fluffy clouds that offer the perfect cushion for nestling breasts.

Hayden has married these designs with illustrations in the form of life and death, love and sex. Skulls and flowers – a combination of brash and abrupt images, spliced with delicate illustrations. Hayden says these themes are the omnipresent by which we all live and die.

They are embroidered onto British-made soft cotton velvet and linen fabrics adding a cynically sentimental feel to the designs that play with the awkward to make it beautiful.

Both will also unveil individual works – Hayden will be exhibiting a bespoke chair upholstered in a velvet monochrome pattern of his signature skulls called “Bittersweet Symmetry”.

As well as  Anna’s textiles she will also present a set of handmade domestic sculptures called “Dancing Dinner”. These objects do the mundane job of a vessel holding plants or food, but refuse to surrender to boring, twisting limbs into a confusing fleshy world of unique bodies rejecting the formalism of both the dining table and the ‘perfect’ body type.

Anna, has been creating sets and environments for photography, runway shows and window displays as well as art installations over her 15 year career in fashion. Her work has graced the pages of fashion magazines worldwide and her acclaimed displays for Hermes, Burberry and Louboutin continue to inspire awe and wonder from passers-by. Her ground-breaking photo shoots for “Casa Vogue” were the incentive to explore everyday home products that launched Anna Burns Object.

Londoner Hayden, whose practice incorporates painting, sculpture and printmaking, has been described as one of the most provocative artists of his generation. Mixing classically-trained sensibilities and contemporary concerns his work is characterised by bold imagery, often drawn from popular culture and art history, acerbic word-play, traditional craftsmanship and deadpan humour.

NUDE RELIGION is an Oli Goss Art production and will be running from the 15th-23th of September at 59 Hackney Road, E2 7NX, London. 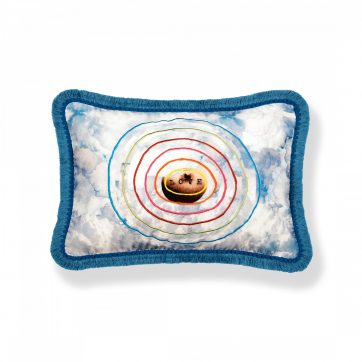 Spatial designer and art director Anna Burns has been running her multi-disciplined Design Studio in Hackney for the past 14 years.