Kate MacGarry is delighted to present the first solo exhibition in the U.K. by American artist J.B. Blunk (1926-2002). The installation comprises 40 ceramics, which are just one aspect in his important multi-disciplinary practice.

J.B. Blunk was a sculptor, ceramicist, painter and jeweller, working across disciplines and combining materials to forge a singular and influential aesthetic. In 1951, having been drafted into the Korean War after graduating from UCLA, Blunk managed to be discharged in Japan where, in a chance encounter at a craft shop, he met Isamu Noguchi. Noguchi was a prominent sculptor and significant influence who introduced Blunk to master ceramicists and ‘National Treasures’ Kitaōji Rosanjin and Kaneshige Toyo, under whom he studied for 6 months and over a year respectively. Blunk served an apprenticeship under Kaneshige for eighteen months, studying the Bizen tradition of pottery which is characterised by an absence of glaze and an earthen, reddish brown colour. The skills he learned whilst studying under these artists played an undeniable role in the development of his visual identity.

After returning to California, Blunk began work on possibly his most significant artwork, the “Blunk House”. Built between 1959 and 1962, the house is made entirely out of materials salvaged from the local area. It is a gesamtkunstwerk; everything from the doors and sinks to the furniture and tableware were made by the artist. Since he owned few tools, each of these elements were carved using a chainsaw, grinder and chisel. The house expressed his vision of a humble and sympathetic integration between art and life, and a profound respect for landscape and our place within it.

The ceramics in the current exhibition span the years 1950–1990 and were made in Bizen, Japan and California. They balance fragility and vigour, and embody the organically hewn aesthetic characteristic of Blunk’s work. Chunky pieces of clay are folded, rolled, pinched and painted. Many are rough, cracked and irregular, demonstrating a resistance to mass production. Lines of glossy glaze and accents of gold leaf on others, demonstrate the artist’s refined and deliberate process. Blunk was led by his materials with no obligation to conform to convention, his lifetime’s work shaped by and devoted to object, form and place.

J.B. Blunk was born in 1926 in Ottawa, Kansas, USA. He had his first solo exhibition at Chou-Koron Gallery in Tokyo in 1954, curated by Isamu Noguchi. Recent solo exhibitions include J.B. Blunk: Nature, Art & Everyday Life, Oakland Museum, California, USA; J.B. Blunk, Blum & Poe, Tokyo, Japan, 2016 and the Landing, Los Angeles (2015). His work has recently been featured in Designed in California, SFMOMA, San Francisco, USA, 2018 and Crafting Modernism at the Museum of Arts and Design, New York in 2011. 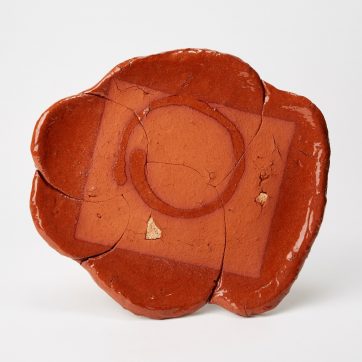 Kate MacGarry is a contemporary art gallery that was founded in 2002 in Shoreditch. The gallery represents 22 British and international artists including Francis Upritchard,…