A minimalist composition for artificial voices by musician Anthony Moore.

For the first time in their history, SCP are pleased to play host to a sound installation, the composition by musician Anthony Moore accompanies the 1 Inch Reclaimed exhibition by Jasper Morrison for Emeco.

The work is a 6 channel, minimalist composition for non-human voices accompanied by a granular synthesis drone played through a small acousmonium of six loudspeakers.

There are three rows of speakers arranged like a vocal ensemble. The deeper pitched voices come from the back row of three, the two ‘alto’ voices from the next row, and the high-pitched, child-like voice is positioned at the front. From time to time voices migrate from one source to another.

Each agent, text-to-speech ‘bot’ or disembodied voice reads excerpts from different texts written by Jasper Morrison. These texts provide the names of each of the 5 short movements of the piece; “The Object Itself”, “The Power of Identical Repetition” (partly in Greek), “I Didn’t Care Much for Minimalism” (a minimalist canon made up from this sentence), “Free to Multiply” and finally, “To Represent an End”. The piece commences with each voice introducing itself. It lasts 8 minutes and 25 seconds followed by a pause of 20 seconds before starting again. It was realised with Ardour (open source software) and an RME UCX interface. 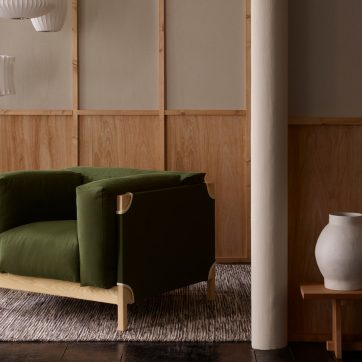 SCP is a producer and supplier of high quality contemporary furniture, lighting, textiles, and accessories. Established in London in 1985 by Sheridan Coakley, the company…