Spatial designer and art director Anna Burns has been running her multi-disciplined Design Studio in Hackney for the past 14 years.

She has created window and installation work for brands such as Hermes, Coach, Christian Louboutin and Tiffany amongst others. Her photographic set design for both portfolio includes collaborations with world renowned photographers including Michael Baumgarten, Miles Aldridge, Ellen Von Unwerth, Tom Craig and Mert Alas and Marcus Piggott.

Working on both editorial and advertising projects she has frequented the pages of Love Magazine, British, Casa, Italian, Japanese and Chinese Vogues as well as creating sets for brands such as Isabel Marant, Hermes, H & M, Balenciaga and Benetton.

Hayden Kays is a London-based artist whose practice encompasses painting, sculpture and printmaking. He is widely described as one of the most provocative artists of his generation for his celebration and critique of the culture industry which demonstrates classically trained sensibilities mediated by thoroughly contemporary concerns.Kays’ work is characterised by bold imagery, often drawn from popular culture and art history, acerbic word-play, traditional craftsmanship and deadpan humour. Using everyday references and pithy witticisms, his work relates to and subverts the canon of the Pop Artists of the 1950s and the Young British Artists movement of the 1990s.Kays has been touted as the YBA’s heir for the street art generation, spearheading the evolution of the movement in the UK today. His hard-hitting messages, which blur the lines between capitalism and culture, human sensibility and the machine age, have caught the eye of patrons such as contemporary art bad boy and original YBA Jake Chapman.

His work is held in the private collections of such luminaries as Harry Styles, Jude Law and Jennifer Lawrence enjoying international exposure from platinum-selling band The Kooks, who used Kays’ work ‘Sending My Heart’ as the cover artwork for their latest album. Recent exhibitions that have enjoyed critical and commercial success alike includeThe Hot 100 (2013),This is Not a Bomb (2014),The Top Ten (2015) andOverdrawn(2016) calling at  London, Paris and Dubai in the process. As part of his continued commitment to charitable causes, Kays was honoured to exhibit his twist on the classic design of a Stormtrooper helmet in Art Wars at the Saatchi Gallery during Frieze London, alongside celebrated artists including Damien Hirst, David Bailey and Yinka Shonibare, MBE.

Kays has been guest editor of the Arts & Culture pages of Hunger magazine and has recently featured in The Financial Times. His work hangs alongside Banksy and Sir Peter Blake on the walls of The Groucho Club London as part of their renowned permanent collection. He is currently working on new exhibitions for 2018. 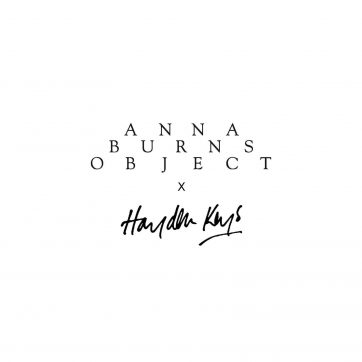 Anna Burns and Hayden Kays are collaborating on a new and provocative collection.