At first an elaborate collection of accessories quickly attracted attention, enabling the fledgling label to show on-schedule during 2008’s London Fashion Week.
The success of this debut collection earned both critical acclaim and commercial success for Anderson, whose label is now regarded as one of London’s most innovative and forward thinking brands.

Its unique design aesthetic offers a modern interpretation of masculinity and femininity by creating thought-provoking silhouettes through a conscious cross-pollination between menswear and womenswear elements. This idiosyncratic perspective, which earned the label a cult following, prompted JW Anderson to present a women’s capsule collection in 2010.

A steady growth in demand gave occasion to JW Anderson’s first stand-alone on-schedule women’s show at London Fashion Week. International editors and buyers have also taken note, gaining the label a prominent reputation in the US, Europe and Asian markets.

JW Anderson has evolved into an internationally renowned and award-winning brand. In the past accolades have included British Fashion Awards for ‘Emerging Talent, Ready-to-Wear’ (2012), ‘The New Establishment Award’ (2013) and ‘Menswear Designer of the Year’ (2014). Most recently at the 2015 British Fashion Awards the brand received an historic double award for ‘Menswear’ and ‘Womenswear Designer of the Year’, the first time any brand has ever won both prestigious awards.

A recent investment by LVMH Moët Hennessy further cements JW Anderson‘s status as a rising, new-generation brand. Following the investment Jonathan Anderson was also appointed Creative Director of Loewe, and works on both brands in tandem. 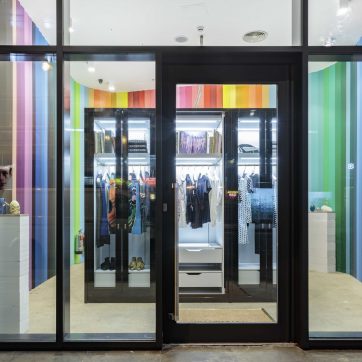